When you kick off a Preview build, Tugboat grabs the config file from your linked repository. Tugboat follows the instructions to set up each Service in your config file, grabbing the specified Docker images and then executing the Service Commands in three phases:

During the init phase, you might use commands that set up the basic preview infrastructure. This might include things like installing required packages or tools, or overriding default configuration files.

During the update phase, you might use commands that import data or other assets into a service. This might include things like importing a database, or syncing image files into a service.

During the build phase, you might use commands that build or generate the actual site. This might include things like compiling Sass files, updating 3rd party libraries, or running database updates that the current code in the preview depends on.

In the process of building your Preview, you’ll specify a default service, and that’s the service where your git repository is cloned. If you want to clone it into other services, see: cloning git repositories into your Services.

By the time the build is complete, Tugboat has configured Services according to your config file, including pulling the Docker images you want it to use for each Service, and has pulled in your code to execute your Preview.

When you’re changing or updating your Preview builds - or building new Previews from a Base Preview - the build process may bypass some of the build phases. For example, when you Refresh a Preview, the build process pulls in updated code from your repo, but only executes Service commands from update and build - bypassing the init commands.

This can get a little complicated, so we’ve made a handy-dandy flowchart to help you keep track of where various processes start in each build phase: 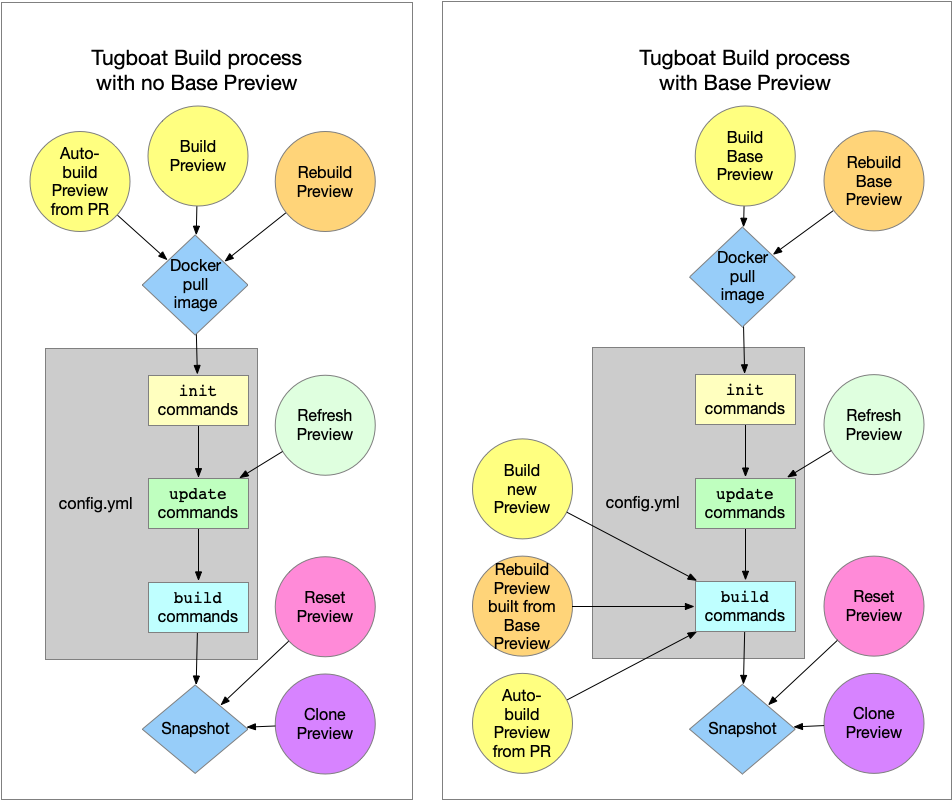 After your Tugboat Build completes, Tugboat commits the entire container, taking a snapshot of that container, including all of its data and Services, at that moment in time.

Tugboat uses that build snapshot as the basis for those actions, enabling you to quickly duplicate a Preview build or reset a Preview build to the state it was in the moment the build completed.

When Tugboat creates the build snapshot, the containers are fully stopped while the snapshot is taken, and then restarted again once the data is committed. If you try to implement a script that “sleeps” in the background while the Preview is being built, that process will not be present when the Preview restarts.

How Base Previews work

When you build a regular Preview, the configuration file typically instructs Tugboat to pull in databases, image files, or other assets. This process can take a while; the larger the assets, the longer the build.

When you mark a Preview as a Base Preview, Tugboat uses that Preview’s build snapshot as a starting point for every new Preview build that matches that Base Preview type. None of the new Previews need to re-download copies of databases, image files, or other assets. Base Previews can dramatically reduce the amount of time required to generate a working Preview.

In addition to speeding up your Preview builds, Tugboat saves disk space by storing only a binary difference between the Base Preview and Previews built from that Base Preview. A new Preview only uses whatever space it needs that differs from the Base Preview. Often, this means a Base Preview might use 2-3GB of space, and a Preview built from it might only use 100-200MB. This is a great way to keep a Tugboat Project under your billing tier’s storage limit, even when you’re building multiple Previews.

When you set a Base Preview as a Repository Base Preview, you’re telling Tugboat to build every new Preview within this repository from this Base Preview. 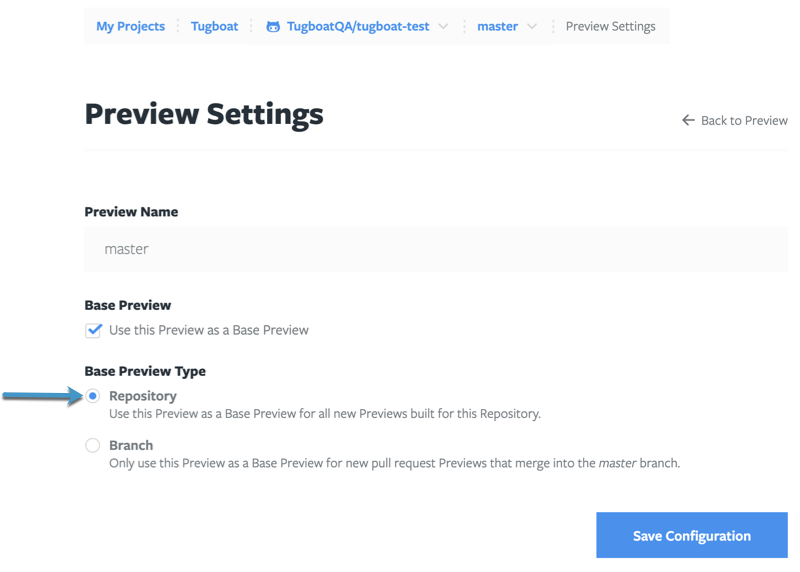 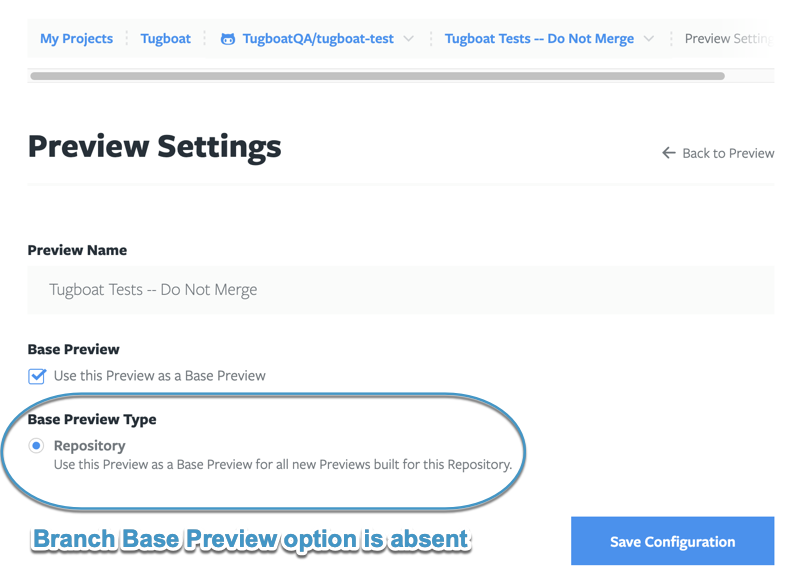 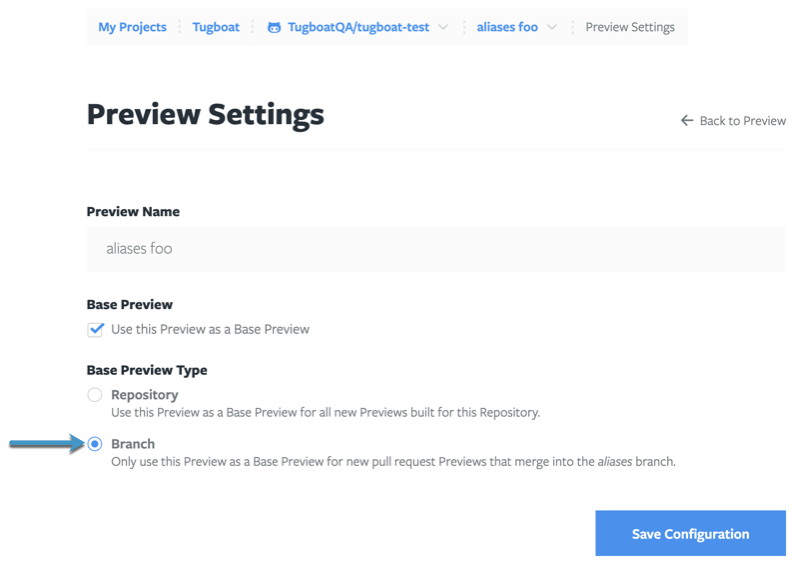 You can narrow your view to see only the Branch Base Previews by selecting the Branch view filter.

What Tugboat calls “Preview size” is actually the size of the container in which the Preview lives. When a Preview is done building, Tugboat takes a snapshot of the container at that moment in time, and that’s what you’re seeing in your Tugboat Dashboard.

For example, say I’m building a Preview that uses Tugboat’s Service images for apache, mysql and redis; those Service images are 154MB, 226MB, and 147MB at the time of this writing. That’s over 500MB for these Services; by the time you add a database file, the container’s operating system and other assets, you’ll likely be looking at 800MB to 1GB for a Preview that’s only pulling in 100KB of code from your linked git repo.

Preview status is indicated in a couple of different ways:

A Service could be in any of the above states, as well as: